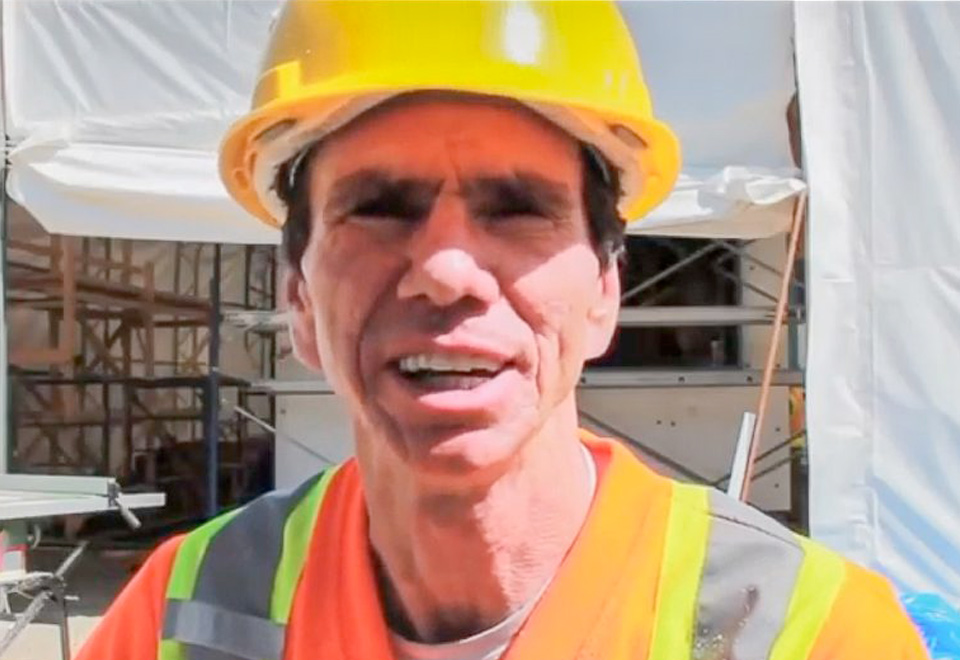 Donald James Gill: Recollections on an Amazing Tradesman from the Yukon Carpenters Union

Oak and birch are two of the most loved trees in the world, and for good reason.

Oak, for carpenters, symbolizes strength, morale, resistance, and knowledge. It is associated with honour, nobility, and wisdom due to its size, toughness, and longevity.

The birch symbolizes beauty, rebirth, and utility. Birchbark was used for almost everything by our ancestors, from paper and maps to artwork and baskets. Birch has been used to ceremonially wrap the bodies of our deceased, as well as to line canoes. Birch is also one of the first trees to leaf back to life in the spring. It is the tree of renewal – of hope and of life.

Donald (Donnie) James Gill: son, father, grandfather, brother, friend, mentor, and carpenter, passed away after a brief but stoic battle with cancer at his home in Whitehorse last week. He was 56.

Today, as we lay Donnie to rest in his Yukon-made casket of oak and birch, I want to recognize those members of the Yukon Carpenters Union Local 2499 who volunteered to build his final resting place. Fletcher DeGraff, Tytus Hardy, Doug Rody, Richard Atlin Jr., Rodney (Smarch) Jules, Laurie Catto, and Levon Lacoste. Thank you for your beautiful work for a beautiful guy. Special kudos to Keith Wolfe-Smarch, master Tlingit carver, for the beautiful addition of a carving in red cedar of Donnie’s name and the symbol of the United Brotherhood of Carpenters. That is the kind of person Donnie was. He always could inspire.

If everyone whose lives were touched by Donnie were present at the service celebrating this man, there would not be a room in the Yukon that could hold them all. In COVID-19 times, it makes this loss even more difficult. It breaks my heart that I cannot be present at the service. I’m sure it does for many others.

But I can help curate the stories that have been told in the Yukon Carpenters Union meetings and from conversations with tradespeople and contractors across the Yukon.

There’s long-time president of the Yukon Carpenters Tytus Hardy’s story about working at the Whitehorse Correctional Centre with Donnie: Tytus was having a small but heated dispute with one of the sub-contractors that might have turned ugly and could have led to an early dismissal for Brother Hardy had Donnie not stepped in with his trademark diplomacy and smile to save the day.

Yukon Carpenters Union Vice-President Billy Bromell remembers multiple camp jobs with Donnie as a great place to be with great company. The two of them stayed in Carcross staff housing for a year with lead instructor Al Narcisse teaching carpentry class in the morning to a group of Carcross/Tagish First Nations (CTFN) apprentices and building Tiny Homes every afternoon. That was a special project and a special time to pass along skills, knowledge, and the notion that a career in the trades can lead to an incredibly fulfilling life, as Donnie put it in the CTFN Tiny Homes video (Google the video, it is worth a watch).

Everyone has a favourite Don Gill moment, memory, and story.

Richard Atlin Jr. remembers working on the flooring of the CTFN Learning Centre with Donnie. For levelling purposes (I assume), there were leaf rakes all over the ground. Donnie was wandering the site with his trademark John Wayne/carpenter gait (the ‘Donnie Walk’), and of course just like in an old Three Stooges episode, he stepped on the rake. WHACK! Up it goes. It nails him. Right in the forehead. Everyone saw it. There was a moment of quiet before somebody started giggling. Then Donnie led the laughter. That is why you wear your hardhat the correct way though. No goose egg on that day for him.

For Nelson Lepine, the guy behind the Tiny Homes concept of learning and apprenticeship, Donnie’s work-life story is more about his ability to mentor. He really cared about what the First Nation and the Union were doing with the concept of practical-life and trades learning and healing. He knew that the approach to lifting people up had to change in ways to help people move forward. Donnie was a crucial part to those successes.

Donnie had many tips and tricks of the trade: keep your nails heads up; don’t always count on the skill saw guard coming down automatically (he learned that one the hard way); and above all, keep smiling. Life is surprisingly good, overall, if you let it be.

Donnie’s vehicles would occasionally go missing from the jobsite. We were never sure if he just left the keys in that old Jimmy of his or not, but the vehicle would always show up in McIntyre. It never fazed him. “Oh, I guess one of the boys needed a lift home,” he would say, then he’d dutifully head up to the Village to pick up the Jimmy. It was always in the same shape as he had left it. Donnie liked helping people: it didn’t matter if they had asked first or not.

My personal favourite story is when the Union sent Donnie down to the United Brotherhood of Carpenters Training Centre in Las Vegas, Nevada. It was quite a chore on its own to help him get his passport, as Donnie wasn’t the best at paperwork. Or computers. But we somehow managed. Anyway, Donnie called me when he arrived at the training centre; apparently, he had spent the entire line-up at U.S. customs sweating over the fact that he might not exactly be welcome in the good old US of A. This fact he had failed to mention to me, even after the Union bought his flights. I guess that when our friend Donnie was younger and a little wilder, he ran the border at Skagway.

I mean ran. An ore-hauling truck was stopped at Skagway customs. Donnie popped the clutch and blew by the truck on the right-hand side and right past the customs station without stopping. He decided that perhaps it was time to turn around when an authoritative voice came across the loudspeakers on the mountains of the pass explaining that if he did not turn around, they would apprehend and open fire. Donnie turned around. Apparently, U.S.A. customs managed to forget and forgive. Or maybe they made a mistake. Regardless, Donnie got to take journeyman mentoring courses at the training centre in Vegas, and apparently got to see a lot of other sights and sounds in Sin City. But we will save those stories for another time.

Donnie put his stamp on the Yukon: from scaffolding bridges over the Klondike River on the Dempster Highway to the Jim Robb caricature homes at Pelly Farms, from the Kwanlin Dun Cultural Centre to the Carcross/Tagish Learning Centre, from homes to shops to camps right down to the Yukon Women in Mining offices at 106 Strickland Street, Donnie built the Yukon. Well, he did have some help. But trust me, it was mostly him.

As an Indigenous Red Seal carpenter from the ?Esdilagh First Nation (but essentially adopted by the Selkirk in Pelly), Donnie was an incredible role model for First Nations youth and apprentices of all ages. Nothing against the other Tiny Homes instructors, but Donnie was clearly the favourite. A harsh disciplinarian he was not. But with his constant smile, unflappable work ethic, and infectious positivity, it was tough to have a bad day on the jobsite with Donnie. Donnie was also famously sober – and was frankly a mentor to me when alcohol began being a problem in my life. He smoked like a chimney and drank coffee by the gallon but was proof that living sober is worth it. I love him for that.

We can be thankful for small miracles. At least Donnie was able to be at home and not alone in a Vancouver hospital. At least he was able to visit so many of the people that filled his heart with the love he then poured back out. He was even driving right up to the end: he wanted to visit everyone.

He did not manage to get to everyone. But he wanted to. That is the kind of human Donnie was. We could all learn a lot from his humanity, his empathy, his kindness, his compassion, and his carpentry.

I know I did. Thank you so much Donnie. And mussi to Donnie’s family, who very unselfishly shared him with the Union and with all of the Yukon. We will never forget him.

Jeff Sloychuk, on behalf of the Northern Carpenters and Allied Workers Local 2499 and the British Columbia Regional Council of Carpenters, as well as Donnie’s brothers, sisters, and friends in construction and in life, everywhere.